Fertilization With Conventional Insemination vs. ICSI 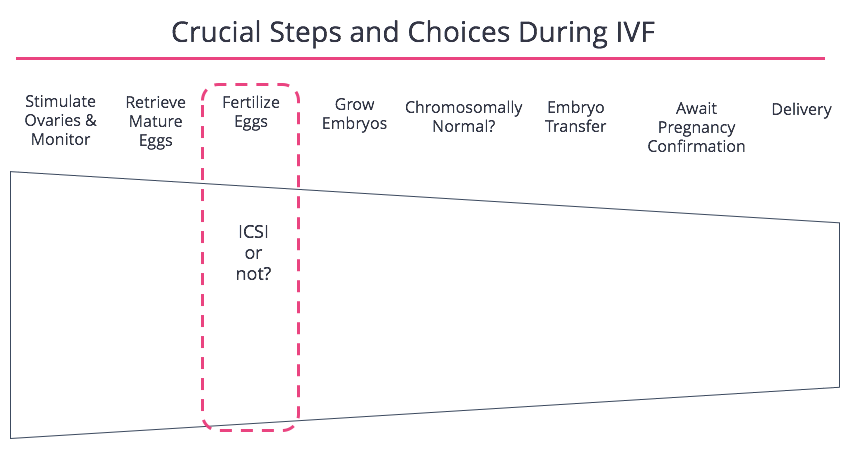 In this technique, a woman’s eggs are surrounded by sperm in a petri-dish and ultimately one sperm fertilizes the egg. Conventional insemination largely recreates the “best sperm wins” dynamic of natural conception. The fear with CI is that in 10 - 15% of cases, patients experience total fertilization failure (TFF) where none of their eggs fertilize. That seldom happens with CI’s alternative, ICSI.

In this technique an embryologist selects (in a pretty crude way) a single sperm from a man’s semen sample and injects it directly into the egg. The chief issue with ICSI is that this microsurgery costs an additional $1,500 - $3,000, can only be performed on “mature eggs” (ruling out ~20% of eggs that are retrieved), 5 - 15% of eggs are damaged in the process, success rates vary by embryologist, and there is some suggestion the offspring from ICSI may fare slightly worse. 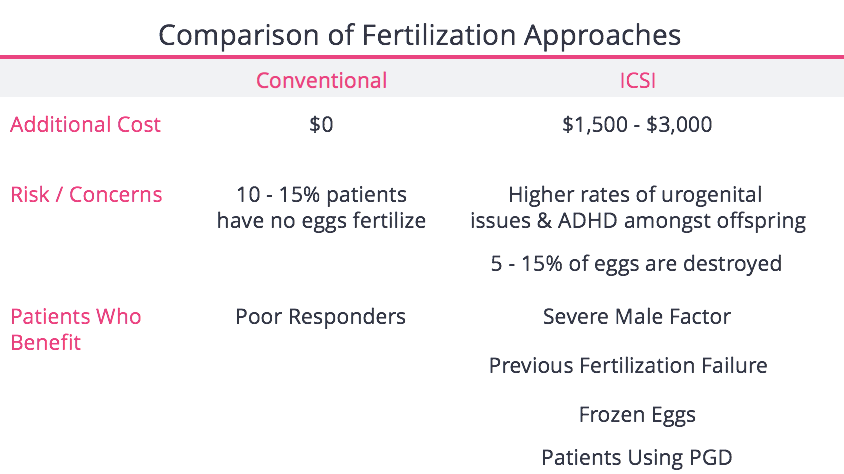 Which Patients Benefit From Which Approach

Today ICSI is used in 90% of IVF cases that involve male factor and 60% of cases that don’t. The reality is that a minority of these patients likely benefit from ICSI and in this section we’ll cover where the data supports one approach versus another. Below is a quick summary of what the data reveals. 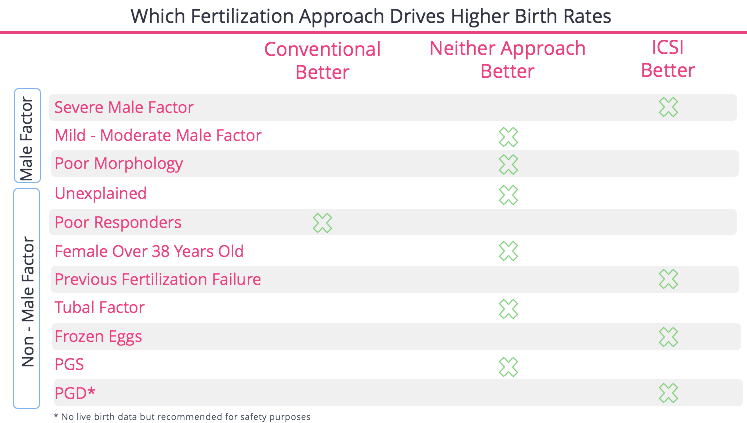 When the CDC reviewed how all male factor patients fared with ICSI versus CI, cycles that used ICSI were less likely to be canceled (6% vs. 14%) and yet this translated into only moderately higher live birth rates per cycle (37% vs. 34%)

For men who produce no sperm (known as “azoospermia”) or sperm that doesn’t swim forward, ICSI clearly improves the odds a cycle will result in a baby and should be considered a requirement.

Let’s look at the case of men with non-obstructive azoospermia (known as NOA). These men produce no sperm and surgery is required to retrieve it from nodules in the testicle. Often just a little sperm is retrieved, so fertilizing the eggs with Conventional Insemination isn’t an option. When sperm is found and ICSI is used, 36% of these IVF cycles lead to a live birth. In these cases, ICSI is invaluable.

In cases where semen parameters are otherwise good but fewer than 5% of the sperm have a normal shape, the better-run studies indicate ICSI does not improve live birth rates. A team from the University of Utah (Keegan) concluded in their recent meta-analysis that in this population ICSI is relatively ineffective.

What do we do in cases where men have low, but not severely low, scores on the semen analysis? In this context, the quality of our data is poor.

The best study (Tourneye) demonstrates that using ICSI reduces the risk of total fertilization failure (no eggs fertilized) in a meaningful way. However the study is small (76 cycles), overly-broad in terms of who it includes (patients with count, motility, and morphology issues), and it doesn’t measure the critical endpoint of live birth. The authors concluded for every three patients that used ICSI to fertilize their eggs, one was spared the devastation of having none of their eggs fertilize.

The CDC also looked at whether patients who don’t have a male factor issue benefitted from ICSI. They noted the number of cancelled cycles were similar between ICSI and CI and the group that used CI to fertilize their eggs had higher rates of success. In effect, using ICSI did not help this group of patients.

Similarly, the best study (Bhattachyra) comparing ICSI vs. CI showed no statistical difference in pregnancy rates. However, the analysis may not extend to women over age 37 or couples that previously had low rates of fertilization (less than 20% of eggs fertilized), as these groups were excluded.

As you’ll see, “non-male factor” is a broad group and, when we sub-segment it, we note the differences in rates of success between ICSI and CI vary by patient population. We’ll tackle what those sub-segments might look like below.

When there’s no discernible cause for a couple’s infertility, and the man’s semen parameters are within normal ranges, it’s common for doctors to use ICSI. The data doesn’t totally support that approach.

Below are three small, single center studies that consistently show using ICSI virtually eliminates total fertilization failure, which is good. And a larger meta-analysis from 2013 confirms the observation. However, only one study (Foong) went so far as to compare live birth rates (in women under 40) and the study showed no significant difference between the patients who used ICSI or CI (though the study’s power was low).

The CDC data showed the rates of cancellation (likely on account of total fertilization failure) were similar between the groups and also showed the ICSI population had a slightly lower live birth rate.

The CDC data looks at women with four-or-fewer oocytes. The data clearly shows the ICSI group had a lower rate of cancellation but also a lower live birth rate per cycle (15% vs 13%). The implication here is that for women who produce few eggs, ICSI may do more harm than good. Again, when ICSI is deployed, fewer eggs are candidates for fertilization because immature eggs (~20% of all eggs) can’t be used and another 5 - 15% of eggs are destroyed in the process. That may be most problematic for women who produce few eggs to begin with.

We have no prospective, randomized trials on whether ICSI improves outcomes for women of advanced maternal age (defined here as 38 and older). The CDC data shows no difference in the percentage of cancellations and from a live birth rate perspective, patients who used ICSI had pretty similar rates of success.

Anywhere between 5 - 15% of patients will have a low percentage, or none, of their eggs fertilize during an IVF cycle. If you’ve had low-or-failed fertilization before, there’s a 40 - 50% chance it will happen in later cycles, so doctors err on the side of using ICSI. The data shows this is a wise choice.

One study took half of this patient population's eggs and fertilized them with ICSI and tried using CI for the other half. When ICSI was utilized, fertilization rates per egg were higher.

Another group did a similar exercise and noticed that for patients with a previous total fertilization failure, ICSI not only fertilized a much higher percentage of eggs, but also led to far more live births.

The CDC did not study the subject likely because few, if any, doctors in the US feel comfortable treating such patients with CI. Hence, there is almost no data to study.

In a study out of Turkey (Bukulmez), women with only tubal factor issues had their eggs fertilized with ICSI or CI. During the study, not a single patient had total fertilization failure, pregnancy rates were identical and the live birth rates had a difference that was not statistically significant.

Another study done in Austria (Poehl) showed similar results. For both groups, the rates of total fertilization failure (when none of a patient’s eggs fertilize) were practically zero and, importantly, the ICSI patients had lower rates of ongoing pregnancy.

The CDC review did not investigate the issue, but given the above, it would appear for patients with a solely tubal factor issue, ICSI doesn’t improve outcomes.

ICSI is used as the default tool for fertilizing cryopreserved oocytes. The rationale is that ICSI is likely to have higher rates of success with eggs that have undergone structural changes during the cryopreservation process.

We have seen only one study that compares success rates of ICSI and CI in cryopreserved eggs. The study was small, conducted on an old freezing technology (slow freeze, not vitrification) but demonstrates ICSI has meaningfully higher fertilization rates (46% vs 14%).

When sperm is frozen it often has a detrimental impact on the sperm’s motility. For this reason, many clinics are leery about using Conventional Insemination in this situation, especially since any sperm that required freezing is likely precious and hard to obtain.